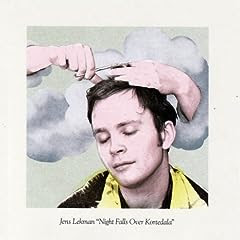 One of the criticisms levelled at the second album proper by lugubriously voiced Swede Lekman is that the lo-fi charm bolstered by samples of his much admired earlier work has been superceded with his signing to proper labels by the sort of recording budget by proper string and horn sections, whether live or recorded by someone else, that dilute its production values into a kind of retrogressive MOR, before the first vocal And I Remember Every Kiss already being subjected to rolling timpani and swelling strings. Actually, it's only a partial giving in even if you accept that, which we don't really due to the way Lekman makes it work for him (bar Sipping On The Sweet Nectar's guileless Barry Manilow hints) - even when that same song is exploding into brass fanfares like a budget Walker Brothers you'd hardly recognise it as a chorus and there's that old Lekman puppy dog romanticism about its key lyric "I'll never kiss anyone who doesn't burn me like the sun".

And whatever the surroundings, Lekman is still one of indiepop's great chroniclers of ordinary life, here through the prism of his tainted new surroundings in the Gothenburg suburb of the title. The Opposite Of Hallelujah matches a soul stomp like Berry Gordy remixing Postcard-era Orange Juice with lyrics about failing to articulate self-doubt, A Postcard To Nina is a gauchely observed tale of awkward graces as Lekman pretends to be a lesbian's boyfriend when she sees her parents. Your Arms Around Me makes sentimental capital from Lekman accidentally cutting his index finger slicing avocados when surprised by the titular loving event, even with a ukelele solo bridge. Shirin meanwhile is a song of love to his Iraqi immigrant hairdresser which, not content with changing pace and time signature completely just for the middle eight, features the lyric "what if it reaches the government/that you have a beauty salon in your own apartment?/I won’t tell anyone". The contemplative flute and xylophone-riven It Was A Strange Time In My Life tackles his own growing pains, pausing for a near-acapella central section in which he declares "Most shy people I know are extremely boring/Either that or they are miserable from all the shit they've been storing". Unusually it's the last track at which the album hits uptempo paydirt, Friday Night At The Drive-In Bingo documenting life as a city boy in a Swedish country village (Lekman worked in a bingo hall during a career break) and bringing Lekman's singular personality to bear, as he does throughout to great effect.

LISTEN ON: Friday Night At The Drive-In Bingo
WATCH ON: Sipping On Sweet Nectar

Charles, Slow Club: "I reckon the Shins' new album is the only album I've been out and bought this year. It's pretty awesome, shame they stink live."
Posted by Simon at 12:02 am