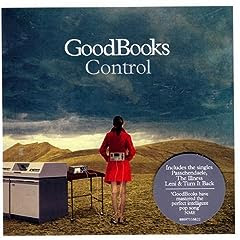 It should have happened for GoodBooks, but it didn't. Feted more for their remixes than their original material, they got caught up in the tail end of the post-punk revival and hence the post-punk revival backlash, not to mention the 'amusing' confusions with the far less idea-rich Good Shoes. Max Cooke has said it was Hot Chip that made him realise he "didn’t want to be in a band that sounded like Oasis". Control sounds like a lot of what is around it but more so, and that's the key - where others traipse about expecting their 'team' to get them into the top twenty regardless, GoodBooks' only showy ambition is that to make an album people will fall for and leave them standing proud when all about dissolves like so much Terris.

And when Beautiful To watch kicks in and JP Duncan's fuzztoned keyboards start playing off the urgent staccato guitar and dancefloor-headed bass is the moment when you realise what went wrong with many a bigger band's album in 2007 (we're looking at you here, Okereke. And you, Smith.) Passchendaele sounds like British Sea Power taking on those early Athlete singles, the really good ones before they followed the Coldplay money, the bittersweet story connecting two generational males killed in both world wars driven by a drum machine appearing whenever things threaten to calm down. Acid house sequences drive The Curse Of Saul along with a great big singalong chorus, dulcet keyboard fills and a bassline on loan from Gang Of Four, and you see what Cooke was getting at back there even before catching the references to "the third way" and "bring our neighbours back from war" and realise it probably isn't just about the first king of Israel. Violent Man Lovesong's trance suggestive electronics provide backing to Cooke dropping volume to recite a disturbing promise of the man of the title. The run home is where Control really stakes its claim in this list, Walk With Me's jittery pace changes, jarring Casio chords and a choral late middle eight followed by Leni's contemplative artrock shifts and ending with Turn It Back and Start/Stop, both XTC with extra roboticness. It's here you work out the best thing about Control: not only is it a damned fine debut, intransigent in its scope in the face of major label aims, but there's enough innate promise to, unlike so many others, make the prospect of second album development welcome.

LISTEN ON: The Curse Of Saul
WATCH ON: Passchendaele

The Young Playthings:
Bateman: Strung Out - Blackhawks Over Los Angeles
JT: Modest Mouse - We Were Dead Before The Ship Even Sank
Tibor: Battles - Mirrored
Posted by Simon at 4:29 pm