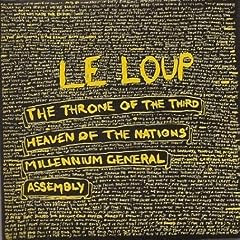 If you're calling your album The Throne Of The Third Heaven Of The Nations Millennium General Assembly, then not only are you providing a gift to anyone watching their word count - it's named after an ambitious set of outsider art sculptures created from found materials in his spare time by Washington janitor James Hampton - but you're going to have to justify yourself quickly before you get filed under 'frankly trying our patience'. Luckily, Le Loup, or on records just Sam Simkoff, have/has far more about them than to fall for that. The press for the album refers to it being produced during a state of catharsis, and the first and penultimate tracks, Canto I and Canto XXXIV, take their names from another great work produced in turmoil, Dante's Inferno. Understandable, therefore, that much of it has the weight of the world on its shoulders, but there's also a hope and optimism driving much of the narrative as well as a goodly amount of spirituality in all its forms.

Musically, we're back in freak-folk territory, Canto I coming across with the same headphone listening-aided layering and communal off-kilteredness of Grizzly Bear, followed by Planes Like Vultures taking on the calmer moments of Animal Collective with many multitracked vocals while the lyrics develop from "this world was made for ending" to "our prayers are answered". Like both bands, as well as occasionally audible influence Sufjan Stevens, it's heavy on the banjo, making that connection back to founding father Americana, but as on We Are Gods! We Are Wolves! isn't afraid just to run off keyboard effects. Look To The West is reminiscent of Britain's own Tunng if they used an overdriven electric guitar, while Le Loup (Fear Not) revisits the Sufjan/Panda Bear/Grizzly Bear comparisons, breaks down into wordless harmonies, gets overtaken by a pinpoint riff and ends up suggesting pre-fame Modest Mouse. Seven minute plus closer I Had A Dream I Died comes on like a funeral march for freak-folk, the chorus continually suggesting "this is the end" as the lyrics wonder whether we can get everything sorted before passing on. Not exactly new Memphis Industries labelmates the Go! Team, then, but a bravely ambitious and highly singular attempt at gaining strength through multi-faceted chorality.

LISTEN ON: Planes Like Vultures
WATCH ON: Le Loup (Fear Not) (live)

Sam Simkoff, Le Loup: "The Shepherd's Dog by Iron And Wine. It's a lot more intricate and energetic than previous albums by them, I think, and the instrumentation and melodies are fantastic."
Posted by Simon at 12:01 am