The Nation Favourites: The Wave Pictures 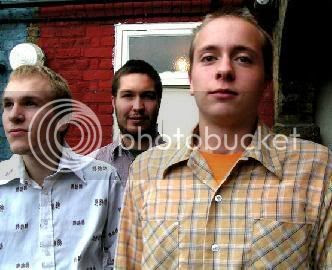 Last year we wandered into the smallest tent at End Of The Road to check out a band we'd vaguely heard the name of only to find half the festival in there too, a sizeable hardcoe shouting for certain songs the rest of us didn't stand a chance of knowing. Clearly word had got out about The Wave Pictures, and it spread further after Instant Coffee Baby, a sumptuous, gorgeous album of literate three-piece indie pop beauty. Next weekend, all being well, we'll be seeing them at Indietracks; on August 4th they release the Just Like A Drummer EP, featuring five new tracks (supported by a gig at London Borderline on July 30th supported by A Classic Education), and are planning another album before the end of the year. Frontman David Tattersall took our questions.


You originally formed in Leicestershire, you're now associated with east London and I've got a track of yours on a Cardiff scene compilation. Can you clarify your story so far?
Yep. Franic Rozycki, the bass player, and myself grew up in a small village in Leicestershire called Wymeswold. We played music together for years. We then went to different universities. I went to Glasgow University and Franic went to an art college in Cardiff. Franic met Jonny Helm, the drummer, in Cardiff. We all completed our degrees to keep our parents happy, then moved together to London.

Is it odd to be talked about as an exciting new band ten years in?
It’s a little odd to be talked about at all. You realize very quickly that what you actually do doesn’t affect people as much as what they read about you. There’s a huge gap between reality and perception. Baudrillard was right! I can’t spell his name, but he was right anyway. I suppose something that I personally can’t relate to is the idea that ‘exciting’ and ‘new’ are words that have to go together. I read it a lot, but it seems to me that there are a lot of ‘exciting old’ things. Maybe The Wave Pictures are an ‘exciting old band’. Maybe people could just be excited because we’re exciting and it wouldn’t really matter how long we had been exciting for. Anyway, yes it is weird. But I’m happy about anything that means people hear the music we have made.

As someone brought up in Oadby, I can empathise with the writing from the perspective of village just outside large Leicestershire town. Do you think you're inspired by that kind of small town ennui?
It’s quite likely. I lived in Wymeswold, which has an almost entirely white population of a little under a thousand, until I was nineteen. I didn’t realize how unusual it was. There truly was and is absolutely nothing to do there except go to the pub. I was lucky in that I had some friends and we played football constantly, twice a day. When we got a little older we started playing music. But I’m sure it means that I’m ignorant of a lot of things and probably a bit of a day dreamer. I think there’s something to be said for referring to the small town experience in songs, though. There’s a lot of good country music that refers to small town people, and Bruce Springsteen does it a lot too. There’s something interesting about the places that are far away from the epicenters of activity - the big cities.

How did the connections and collaborations with Herman Dune, John Darnielle and Darren Hayman come about?
Herman Dune were a band that I very much admired six or seven years ago. They were a John Peel band, great guitarists and singers. I gave them a CDR of The Wave Pictures after one of their shows a million years ago. They liked it and got in touch and I went and played on a John Peel session with them and did a tour with them. I’ve played with them over and over again since then. I still love their music. Now Andre has left the band and he records as Stanley Brinks and I love his music too. I just spent the last week with him in fact, he’s a good friend. He also records with a really great French singer called Freschard. David and Neman have carried on the band ‘Herman Dune’ and are still doing good stuff too.
Darren Hayman is also a friend, he lives up the road from me. I was a huge Hefner fan back in the day, but I really think he’s doing the best work of his career now as a solo artist. I play with him in a bad called Hayman, Watkins, Trout and Lee. I met Darren through Simon Trought, who records both The Wave Pictures and Darren Hayman in his Soup Studio underneath The Duke of Uke on Hanbury Street, East London.
John Darnielle I don’t know in at all the same way as Darren or Stanley Brinks or Herman Dune. I admire many of John Darnielle’s records and he’s good company, but we’re not mates or anything. I enjoyed the time I spent recording and playing music with him. Good song lyrics seem to flow straight out of his brain and down his arm and onto the page. And he can sing too. That recording session we did with John Darnielle was six years ago. It came about because we were invited by Herman Dune to a festival. We were on a bill with people like Daniel Johnston, Rachel Lipson, Jeff Lewis and The Mountain Goats. There was a whole week of recording before the gigs started too.

Do you feel a kinship with the antifolk scene?
No. I dislike almost all the music I have ever heard that has been described as antifolk. There are a few exceptions. And we’ve met lots of nice people who are interested in that scene. It’s not a personal thing on any level. But most of the music that I hear that’s called antifolk sounds very very bad to me. I’m not interested in that music at all. To me antifolk is a term that sort of means ‘bad music’. For instance, I think Jeff Lewis is a very gifted songwriter, so I don’t consider him ‘antifolk’, even though he might and everyone else might. He’s just a songwriter to me. Everything I think of when I think of ‘antifolk’ is bad! I like rock and roll mostly myself, country music, blues, The Rolling Stones, The Velvet Underground, soul, some early jazz things like Sidney Bechet or Django Reinhardt. I don’t like antifolk.

At what point did you decide to bite the bullet and upgrade from self-recorded CDR?
We got signed to a label so there was money to go into a studio. We still make self-recorded CDRs and we still sell them at shows. The label releases our studio recordings. Basically, we want to make studio recordings and home recordings. Both are fun. We want to record as much as possible, write songs constantly, play all the time. We like it.

How do you write? Do you find the storytelling style easiest?
No. I just write with a pen and paper, not a computer. And it involves usually writing far more than is necessary and then editing heavily afterwards. I think that story songs are sometimes bad and sometimes good, nonsense songs are sometimes good, sometimes bad etc etc. I like a story when it’s done well. But just a scene, a split second, can seem like a story. That’s one thing that John Darnielle does so well; describing one second of life over a three minute song. There are lots of ways to be interesting. I don’t find anything easier than anything else. I’m completely limited to be honest, I have no songwriting skills, and the limitation just forces a certain thing out. Some words I’ve tried to make interesting with the kind of chord sequences I like. That’s it.

Jonathan Richman is a comparison that turns up a lot - fair to say he's a major influence? Why?
He’s just one of my favourite musicians. My favourites are Bob Dylan, Lou Reed, Bruce Springsteen and Jonathan Richman. The guitar player singer with a rocking band (preferably). I like those guys the best! It’s just their voices, the things they say, their guitar playing. You’re less lonely when you put on one of their records. It’s always what I wanted to do too. It always seemed like a good plan. You might as well try to make your favourite kind of music. Well, even if you don’t try it would happen. Jonathan Richman in particular is special because unlike those other three, he never became a millionaire and he never made a single album that is truly bad. He keeps all of his focus on playing the guitar and singing songs, so he could never be bad as long you like his songs. He’s not gonna spend a fortune making a synth album and then have to spend a fortune on the next album by recording it with Albini to make it seem like he’s gone back to keeping it real. He really just keeps it real all the time. And he seems to do it all for fun as well. I like him very much. Good songs!

What's the last decent thing you heard?
Well, right before I left my house to come and do this interview I was listening to Elmore James. He was more than decent, he was truly an astonishing musical force. You can imagine him being the missing link between blues and soul. It’s blues but he sings with the maximum intensity of a soul singer. He plays big thick chunky slide guitar, makes raw electric guitar sounds. And the horns on it are great too, big swampy horns. I was having a good time. All the songs are like little sad letters from the past. It was very old and very exciting, to me, at least. I’m sure you can pick up cheap compilations of Elmore James anywhere, it’s usually easy to buy most of those old blues guys. I’m not sure when he was recording, I guess the 1950s, maybe the end of the 1940s?

What next?
We are playing some shows this week (well, last week now) with an excellent French band called Coming Soon. We’re playing at the Indietracks, Latitude, and End of the Road festivals. We’re traveling to Norway to play a show there and we’re planning a small tour of Germany. We’ll be playing somewhere. We’re also in the process of home recording an album of covers live to two track tape. We’re also mixing an acoustic guitar album we recorded in Berlin and the next Moshi Moshi album which we recorded in London. We’re having a lot of fun making music these days.
Posted by Simon at 12:01 am

Email ThisBlogThis!Share to TwitterShare to FacebookShare to Pinterest
Labels: the nation favourites

Wave Pictures collaboration with John Darnielle! Which, I'm delighted to find, is both downloadable off their website and appropriately excellent.

Good interview. Looking forward to them at Indietracks a lot.