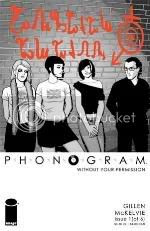 To be honest, we know next to nothing about the world of comics. We do, however, know plenty about Kieron Gillen, currently of Plan B and assorted gaming magazines, which is why we're particularly interested in Phonogram, his debut offering, alongside illustrator Jamie McKelvie (official credits: 'lyrics' and 'music' respectively), which is currently gaining a ton of exultant reviews on the international comics front. It centres on the ideology 'music is magic', doing this through David Kohl, a phonomancer (we'll get back to that) loosely investigating the death of his Britpop-themed music god Britannia. There's a plot point based on Scout Niblett. The first issue is out now, so gently reminding him about how he let us contribute some rank stupidity to a website of his about eight years ago, we had some questions.

Hello, I'm a layman who doesn't really follow the comics market. What's Phonogram about, then?
Hello, layman. Phonogram is a dark urban-fantasy comic which is based around the concept of music being magic. In more familiar media terms, think Constantine (except not rubbishy) meets High Fidelity.
To put a bit more meat on it - well, you know music is magic. It's the only explanation for why a series of notes could make you feel better, worse, happier, sadder, more productive. Science has tried. As of yet, science really doesn't really have a clue. Phonogram takes that completely literally and posits if music is magic, then there'll be people who are actively aware of this fact and manipulate their knowledge to change the world. These people are collectively referred to as Phonomancers, and the stories we tell are based around various phonomancers have onflicting desires. As - y'know - all drama is conflict.

Britpop acts as a focal point - for its cultural relevance or as a handy pointer given how much (or little) water has flowed under the UK pop culture bridge since?
The former, really, though the story we're telling in this six-issue mini-series is as much about critiquing it as celebrating it. More critiquing, really. The main theme of the story is about the conflicting desires of actual history, nostalgia and personal memories. What's a memory
worth? And when your founding cultural moment was - to use the lead character's phrase from the second issue - "a cultural Chernobyl" what's that worth? It's very much an anti-nostalgia book, despite all its trappings.

Is there a music fandom related moral consciously underpinning the story?
Well, I don't really know about "moral", but Phonogram's grown from all my years of experience in clubs, listening to bands, obsessing, writing fanzines and generally getting shoulder-deep in pop culture. I've got things to say about it, but I wouldn't really call them morals. I eventually argue a position, but it's very clearly a position rather than a definitive verdict.
Christ, I'm making this sound terribly sombre. There's a load of gags too.

Did your music writing background feed into its development much?
A lot. When you're doing a book which generally circles around the question "What's pop music for?" then you can't help but that. In fact, Phonogram's really meant as music journalism by other means. All the bands included are real. Ditto the events, the settings, the theories, the feelings. Basically, Phonogram's the end result of me not deciding to going into music writing full time and all those thoughts sitting inside the vat of my head and fermenting.

Kenickie feature prominently in the first issue, to the great surprise of nobody who knows your backstory. What to you was their importance?
They were excellent for dancing.
Well, their cultural importance was the narrow-yet-deep sort of obsessive pop band. Pretty much anyone who wrote a zine circa then loved Kenickie, as you're fully aware. When the whole cultural climate was going one way, Kenickie's insistence that seriousness wasn't actually antagonistic to intelligence was an absolute touchstone. They were and remain inspirational. Also, doomed, which I always liked. In terms of Phonogram, we use Kenickie for very specific plot-related reasons, to illustrate passion, how passion can be manipulated and how even the purest love for something can be twisted around. And a few other things.
Seriously, I know I'm sounding really serious, but there are jokes. A lot of jokes. No, really.

Thanks to Kieron - go and read his innermost thoughts. And picking up on that last bit...

This looks interesting, the premise and semantics are reminiscent of Jeff Noon, but that isn't necessarily a bad thing. Hopefully, Nostalgia & Comics in Brum will be stocking copies.

Funny, Jeff Noon is one of my favourite writers.

Dead Kenny: Nostalgia and Comic should stock it. If they don't have one in at the moment, ask and they'll be able to get one for you. It's still in Print.

And yeah, was a big fan of Noon. He's certainly one of the people in that big mulch inside head.

*waves back from behind overlarge rock*