A reminder, or introduction: this is the feature in which we're attempting to put together an alternate library of this decade's lower level album triumphs according to a range of guest bloggers. Feel free to offer your services nominating and writing about a record as this feature will be running nearly all year - all the contributory details are here. Oh, and thanks to Thomas for suggesting the name. You should see some of those we came up with ourselves.

NOMINATED BY: Joe Skrebels of Music From A Green Window 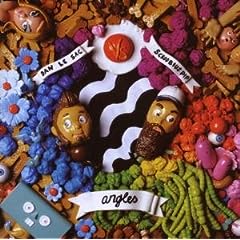 In an age where hip-hop stars are regularly lambasted for inciting violence, misogyny and homophobia, and where a lot of the time this is true, it could be all too easy to slip into a jaded view of the whole genre. But by dismissing it out of hand, a whole world of musical pioneering could be missed - for every Ludacris there's a Mos Def, for every G-Unit there's a De La Soul. Hip-Hop can have something to say, and it can be as meaningful as any lyric sung by some misanthropic indie singer.

From a British perspective, the album that has best done this in recent memory is Angles by Dan Le Sac vs. Scroobius Pip. A producer and a poet from Essex weren't the most likely candidates to become the saviours of intelligent hip-hop, but with Scroobius Pip's wit and biting social commentary backed up by Dan le Sac's 8-bit bleeps and beats, it's hard to disagree. Angles lives up to its name by not approaching the album's subjects in a one-dimensional way, every song is looking at its subject from a new perspective. The eponymous song is the most obvious, looking at a tragic situation from the views of several different people, A Letter From God To Man is a an inverse prayer, whilst Look For The Woman looks at unrequited love from the other side.

It could be easy to look at this album from a purely lyrical standpoint, but Le Sac's understated backings are just as important, often creating an almost stark atmosphere, amplifying the lyrical content, or by sampling Dizzee Rascal in a satire of current hip-hop trends, or Radiohead just because it sounds amazing.

A Letter From God To Man

Email ThisBlogThis!Share to TwitterShare to FacebookShare to Pinterest
Labels: discourse 2000

I think I agree with this but at the same time I am starting to see why a lot of people hate Sac and Pip. But I mostly like them a lot. The title track is WAY too preachy for my liking though.

oh my word. chuffed to bits.