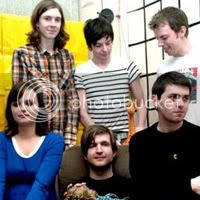 They're a Glaswegian six-piece who coined the term "fight-pop", they're reticent about revealing where the 80s comedy actor-derived name comes from, their Sissy Hits EP blew us across the room arse-first and seeing them live recently supporting Johnny Foreigner tore us a corresponding new hole. They are Dananananaykroyd, and this is what they told us in possibly too much detail. (They also added a question of their own, which was nice of them.)


How were Johnny Foreigner and co?

Calum married Alexei and they are both very happy. They are all awesome dudes, we love them.

So where were you all throughout 2007?

In Scotland, fighting the war against terror, with terror.

Happy with Sissy Hits and the reaction to it?

Because it's surely bound for the Oxford English Dictionary eventually, try to properly define fight-pop.

Fight-pop was invented at the centre of the earth while we were getting a 'massive kegger'.

Do you think you have to see Dananananaykroyd live to fully appreciate what's going on?

You can read the Guardian to figure out whats going on. Our live set is one side to us, we tend to walk around telling everyone exactly whats 'going on', but we like to make records too though!

Who inspired you to get into music?

We are currently watching Coming To America where Eddie Murphy's pre Mel B inpregnanting voice is sounding pretty decent. And also Andrew WK in The Zen Of Screaming DVD.

What's the state of play with a full album?

We are currently writing and practicing it, we'll be recording in August probably.

What would you rather be killed by, an animal or a robot?

If it is a smart robot who would kill you fast, we'd rather do that please.
Posted by Simon at 12:01 am

Email ThisBlogThis!Share to TwitterShare to FacebookShare to Pinterest
Labels: the nation favourites