A Friendly Chat With... Gwenno 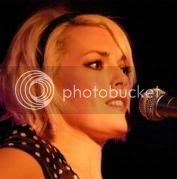 See, we can get words from actual top 40 pop stars too. Cardiffian Gwenno had already had something of a career in Irish dancing and Welsh language singing/media (she also speaks fluent Cornish, a fact which we guarantee will earn you pints in a pub quiz one day) by the time she became one third of the Pipettes last April. It's been nothing but upwards and onwards since as they've become a proper cult pop band unleashing classy modern girl group records effortlessly. That's her on the Your Kisses Are Wasted On Me chorus and taking lead on sound of the summer Pull Shapes. Her nascent electropop solo side project fascinated us too, so plenty to go at...

So you saw the Pipettes supporting the Go! Team in Cardiff, and two months later you'd become a member. Surely it wasn't as easy as that?
I'd bought my ticket to see them about two months in advance, we all knew the show was going to sell out and really didn't want to miss out. I'd heard through their manager at the time that Julia wanted to leave and got chatting to everyone after the gig, went down to a couple of rehearsals and moved to Brighton - it really was as easy as that!

The band's sound is fairly evidently rooted in the 60s girl group template, but how much do you look to evolve it from there?
The 60's girl group template is our starting point. Those bands and their sound is one that was cast aside and forgotten as soon as The Beatles came along and standardised pop. We're trying to look at our popular music history in a different light and that includes many bands that came after that era. We're very interested in evolving our sound and ideas and we have very different music tastes and interests within the band so there's plenty to draw from!

Attempt, if possible, to describe Becki and Rose.
All I will say is that they're both incredibly strong and beautiful young women!

The Go! Team's Ian Parton said recently that he envisaged them as a pop/hip hop outfit but they hadn't been able to cross over from the indie audience. As an unashamedly pop band, might the Pipettes face the same problems?
I think that we've taken a very different approach to the Go! Team. We obviously come from an independent background but that doesn't mean that we can't cross over to a wider audience. I don't think we'll ever have to change what we do to achieve that but I do think as a band you have to be open to compromises along the way without losing sight of what you set out to achieve initially. We're on tour at the moment and yesterday we did an in-store at HMV which was a three song PA to a backing track. We'd never played without at least one of the boys before so we were a little apprehensive but if we hadn't done it then those extra few people that might never have heard of The Pipettes wouldn't have bought our single and got to hear us. As it happens it went really well and the audience seemed to enjoy it. I think you have to take certain risks if you want more people to hear you and we've been lucky to have had the opportunity.

What is it that makes Brighton's music scene so prolific?
There are so many bands in Brighton, even though it has a reputation as a hedonistic town there's not much to do if you live there and don't have the money to eat at fancy restaurants or stay in nice hotels so people have had to entertain themselves. There's always a certain campness to Brighton bands and a real sense of wanting to put on a show which I think ties it all together but in terms of sound there never seems to be a specific one.

Your solo project - how did it start and where would you hope it's leading?
I've always written songs and was doing a lot of Cornish and Welsh electronic pop before I joined The Pipettes. I'd always been interested in classic pop and a female voice in music but coming from Cardiff, which is a very industrial, working-class town there didn't seem to be many people around that had a similar mind set. That was the great thing about seeing The Pipettes at the Barfly in Cardiff, they were making exactly the sort of music that I hadn't been able to do on my own and shared a similar vision and approach to me. The songs on my Myspace are just songs that I've had lying around for a very long time and Myspace was a perfect forum to put them out without it being about releasing records or putting too much thought to it. I think it's always important as a writer to get rid of your songs and let other people have a chance to hear them, there's always something nice about letting them go so they almost don't belong to you anymore.

Who did you grow up listening to, and what have you liked recently?
I grew up listening to a lot of tradional folk music from all over along with Irish, Welsh and Cornish music. My mum sings in a socialist street choir called Cor Cochion Caerdydd which translates to 'the Red Choir of Cardiff'. They've been going for over twenty years (and have had many a line-up change!) They sang a lot of anti-apartheid songs in the 80s and now sing pro-Palestine songs alongside The Internationale and songs like that. Pop music was my form of escapism, I loved Freddie Mercury, early 90's R'n'B and speed garage when I was growing up. I've been listening to Field Music, LO-FI-FNK and Datblygu recently.

Anything you can tell us about that's coming up, apart from the album and tour?
Everything is centred around the album and tour at the moment. We're gradually getting to the point where we can commit to The Pipettes full time, which is great. That's going to free up a lot of time which will mean that we can rehearse and start performing all the new songs that we have. It really is all about playing the album live to as many people as possible and looking ahead to the future!

Many thanks to Gwenno, especially for getting back to us on her one day off the Pipettes' current tour, which is all but sold out but we do recommend trying to get a ticket for. For band business you'll want their official website or Myspace, while two downloadable side project tracks are available here. We Are The Pipettes is out on July 17th and is really very good.
Posted by Simon at 6:10 pm