A Friendly Chat With... Andrew Dost of Anathallo 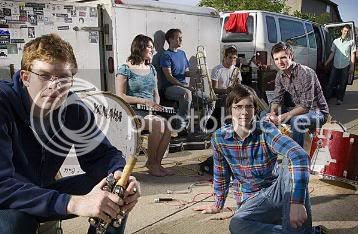 Since recommending Mount Pleasant, Michigan septet Anathallo on here a couple of months ago we've had no end of people thanking us for the tip-off. And we're thankful we've been able to spread the word, as Floating World is an extraordinary album, melding Sufjan delicacy (he's a fan, we hear), Arcade Fire/Broken Social Scene expansiveness, a community tip's worth of metallic waste - anything that makes a decent noise is on the record, essentially - and an overall elegant take on the college indie sound. Andrew Dost plays piano, flugelhorn and adds choral vocals.

For those of us just discovering Anathallo, how would you summarise the band's history up to now?
We've been around for about six years. When the band started, all members except one were still in high school. Since then, we've made a recording about every year, gone through two vans (we're on our third), most have graduated from college, and we're somehow still all friends. We've (hopefully) grown up a lot over that period of time, which is (again, hopefully) reflected in the music. We've gone from touring during spring breaks and Christmas vacations to doing it full-time, which is a terrifying and thrilling idea.

Is it fair to assume a multi-instrumental, fairly experimentally charged outfit like yourselves evolves rather than starts out as such? If so, how much?
Absolutely. The first recordings, while they had some of the same elements (horns, odd time signatures, auxiliary percussion etc) definitely reflected a less focused approach to composition. Hopefully now we're starting to think of things in more of a narrative way, and have songs that reflect themes more consistently throughout. I think our songwriting process works in a few different ways. Some songs are more experimental in structure than others. Overall though, I think a general awareness of that sort of thing has grown, along with ideologies within the band about what music should be and how we should go about writing it. I think in that way the music has definitely changed with the more we read, hear and learn. It's fun to go back and listen to how different the early recordings sound.

Is it difficult to write collectively for seven multi-instrumentalists?
Yes and no. With so many people in the band capable of many instruments, we can really think about what a song needs, rather than what we have easily at our disposal. For example, if a part calls for lighter percussion than a drum set, we can all use smaller percussion to get the textures we want. And having a few people capable of playing the piano is helpful, as there are a few distinct styles within the band, so it can vary from song to song who's doing what. It's difficult in that way too, though, because sometimes it leads to us having absolutely no idea what to do! Which then leads to us all sitting around, staring at each other, and hoping someone will have an idea. Sometimes having too much freedom can be pretty scary, but overall, it's good. Hopefully someday soon we'll be able to have string players, which hopefully will free up the creative process more. It'd be nice to have access to hearing those sounds while writing.

Why base part of the album on the Hanasakajijii Japanese folk tale?
It's a story that really resonated with us, and fit well with our ideas of what we wanted the record to be. There are so many interesting parallels to the story and the themes we had in mind for the album. They seemed to fit together in interesting ways, and also opened the door for a lot of the visually-oriented things we do (both on stage and with album artwork), so it really unified things and focused the writing of the album.

As a heavy touring band, do you see an importance in developing the live sound away from how the songs were recorded?
Yes, for sure. As a band that has evolved primarily as a live group, we tend to write with live performances in mind. So actually, that comes first, then we think about how to record it. For the next album, though, the writing has been happening more with an emphasis on how the recording will sound. I think the new philosophy is that we want to make the recording the primary form of the composition, then figure out how to pull it off live, rather than to prepare for a live show, then try to capture it on record. Live performances and recordings are two completely different worlds, and we didn't really realise that until recently! The songs sometimes have to take a few different shapes to work in different contexts. It's been fun trying to figure out what should happen in different places.

What did you grow up listening to, and what have you been liking recently?
Most of us grew up on punk, ska, classic rock, musical theatre, classical music, and jazz. Personally I grew up with The Beatles, The Beach Boys, Weezer, Ozma, Claude Debussy, Andrew Lloyd Webber, Ben Folds, things like that. I typically still enjoy more melody-oriented things. Lately I've been listening to a lot of Art Garfunkel's solo stuff, particularly "Fate for Breakfast".

What are your immediate future plans? Any news of a full UK release or tour?
We'll be touring with The Format, Rainer Maria and Street to Nowhere for the next couple months. We'll be playing Lollapalooza and Austin City Limits Festival later in the summer, and hopefully making it to the UK. We're not entirely sure yet when that would be, but we're hoping it happens before the end of the year.

Many thanks to Andrew. Floating World is available on import only in the UK or through Anathallo's website. Their Myspace provides all the sound evidence you'll need. The photo is stolen from their Myspace and taken by Patrick Rutherford.
Posted by Simon at 6:36 pm