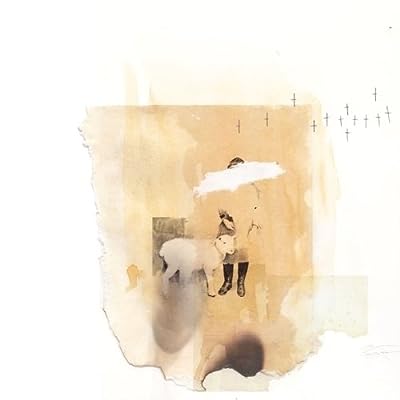 What Her Name Is Calla have carried off on The Quiet Lamb can't merely be placed under post-rock's enveloping tutelage. Leader Tom Morris openly admitted in a The Line Of Best Fit track-by-track guide the album was in part brought along by a breakdown and overdose, and whether through accident or design there's a great deal of frustration, lifeline impotence and catharsis rushing through this first proper album (well, that appellation depends on who you talk to) This isn't just quiet-loud dynamics and rushes of noise and longeurs but carefully evolved spaces honed through their astounding live presence of moving, virtually hymnal stillness rising up to storm-tossed crashing without bombast or losing track of the fine print detail.

As a record beholden to dynamics over 76 minutes it's not an album you can put on in the background while you go about your business but one that requires, indeed commands, full attention (the band claim they spent the best part of a year just post-producing, mixing and mastering it) It's almost something out of modern classical in the repetition of lines and command of every last bit of the swelling arrangement. It takes fourteen minutes for the first truly rousing section, Pour More Oil emerging from the most delicately becalmed of seas into a valhalla march. The centrepiece, Condor And River, takes up seventeen minutes itself but barely wastes a second. The moment when it emerges from the low level haze is virtually transcendental, rushing in on drums into bulwarking guitar noise, then back into silence broken by an emotionally spare piano lament leading into a conciliatory strings and brass coda after which the minimal, blissfully woody folk of Long Grass is a necessary recovery while gorgeously notable in its own right. It's with the near twenty minute, three part closing trilogy The Union that the epic battle is resolved. I Worship A Golden Sun rolls around in crashing cymbals, determined chants and an ever escalating bass drone that steadily turns into skyscraping heroics; Recidivist is full of deliberately discordant feedback and unidentifiable detuned noises before smashing percussion arrives to completely throw everything to bits before Into The West lands somewhere between Vaughan Williams and spaghetti western triumphant parade music before the tribal drums, brass fanfares and the briefest of heroic guitar solos brings this intense show to a close. It's clear a lot of emotional heft and a lot of effort has gone into The Quiet Lamb to make it the adaptable, tense even at tiny volume rollercoaster of density it's turned out to be. Even so there's never a moment when they just let go, because they know precisely what they're doing and to what end.