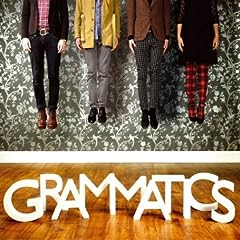 Ambition isn't a word that weighs heavily upon Grammatics leader Owen Brinley, a man who's changed half the band this year and whose music possesses an epic swell and massive plangent guitar sound but with a method of fixing it all to a belter of a hook, melodic twist and/or lyrical resonation in a similar way to how, comparison crocodile pit be damned for a moment, Radiohead do. Almost all the mainstream press reviews compared it to Muse and you can see why, with Brinley's occasional falsetto leaps and moments of skyscraping explosiveness, but rather than space-prog mini-symphonies Grammatics prefer a melodic grandeur with a elusive lyrical quasi-complex opaqueness, stretching and messing with ostensibly pretty pop-rock melodies as Emilia Ergin's cello sails serenely across while clearly paddling furiously under the waterline.

Such is their command of their surroundings that there's far too much going on to start believing it acts as any kind of suite even if it works best flowing in one sitting as it is, such is the sureness of touch. Shadow Committee teases you with unresolved tension then crashes through a colossal vaulting chorus, straight after which D.I.L.E.M.M.A.'s darkly swooning and chiming melodrama almost sounds like pop. The Vague Archive cut and shuts two songs into one, starting charging and hyperventilating like double speed Bunnymen then deciding to be a stentorian post-rock influenced swoop instead. Murderer is what White Lies think they sound like, only with a knowledge of building guitar layers without completely flooding the thing. Relentless Fours loops old school M83 style ambience with a hypnotic intensity, chooses not to smash down the studio walls when it has the chance and instead coasts on cello loop and clubbing drums as Brinley and Ergin duet on an elliptical love/obsession theme which eventually becomes acapella... and *then* the guitar lets go. Even the big rock ending immediately falls down a lift shaft again and again. They can even pull off a widescreen orchestral ballad, even an acoustically led one like the yearning Broken Wing, which eventually pitches Brinley's falsetto into a wall of cello and delay pedal sound. He may be singing about being "in a prism of refractions" on Inkjet Lakes, but all around him things coil and bubble like a volcanic lake while Laura 'Blue Roses' Groves (qv) attempts to stand fast. Six minute final track Swan Song refuses to become the all-encompassing blowout, preferring dynamic shifts veering from willing to swirling to stabbing, and that's just the cello. This is why some still have albums rather than collections of songs vaguely arranged, because this is an album that can't be rearranged or have bits taken apart because it'd collapse like a Jenga tower into a complete mess. Nothing here could pass even in the most warped sense for an anthem, but it demands to be played at top volume across a huge expanse, a knotty, deceiving emotional core at the heart of this remarkably assured and accomplished debut.