NOMINATED BY: Thomas Ferguson, who among other things gave this feature its name and is curating a compilation of songs in response to Two Of The Beatles Have Died, participants in which so far include the Cuban Boys and MJ Hibbett. 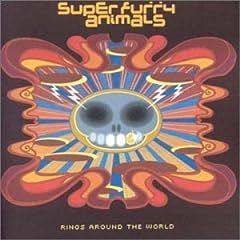 In September of 2001, two days after the Manhattan skyline was afforded a very big and sad new negative space, I was stood awestruck in Southampton Guildhall as a man in a mask of John Lennon threw celery at people. It’s difficult to blame nostalgia for what I’m about to express, especially as this is about a band that are still functioning exceptionally well touring an album less than ten years ago, but there was something in particular about the Rings Around The World tour in surround sound that bristled with a kind of demented, extraordinary sorcery only Super Furry Animals are fully able to operate at will. Yes, the band at the time were occasionally a bit shambolic as they hadn’t fully formed the audio-visual live performance assault that was honed on the tours for Phantom Power and LoveKraft (they didn’t even reappear dressed as sasquatches after the twenty minute techno finale) but they were now deeper, sharper, bolder and – thanks to the stack of speakers parenthesising the venue – much, much louder.

Rings Around The World itself was, admittedly, difficult to love at first. Having been left in the fallout after the well-documented implosion of Creation Records, they released the charming and summery Mwng on their own Placid Casual label, making it the biggest selling Welsh language album of all time and getting the band mentioned in The House Of Commons. However, their album for new home Epic, which had the working title Text Messaging Is Killing The Pub Quiz As We Know It, was initially critically derided for all the reasons it later became so easy to adore.

SFA were still essentially, despite their brief rustic departure into the Valleys, still viewed by the press paying attention to them as those oddball sunshine Welsh lads with their pink techno tanks and inflatable pandas and songs about Sian Lloyd. While the album still explored the same sort of themes touched upon in Guerrilla, of global communication and the development of a new digital world, it seemed light years away from that album’s explosive bubblegum disposition. War, longing, religion, politics and loss all ran much darker lyrically throughout the album, meaning despite its eclecticism and eccentricities it still held together properly as an album of bleaker things, sometimes angry, sometimes sentimental, sometimes unbearably melancholic. That Gruff can sing a frank song about the holy grail of comedy writing at the time, the Clinton/Lewinsky affair, and make it sound utterly heartbreaking is perhaps testament to his skill as one of our most under-celebrated vocalists.

The album’s inability to stick to a specified style was also a feature derided at the time but, ultimately, has cemented it as an exemplary document of what makes the band so brilliant. Despite its diverse nature, the whole thing holds together in a remarkable, almost narrative way. No Sympathy melts from acerbic alt.country into a frenzied acid-breakcore riot. (Drawing) Rings Around The World sounds like Status Quo having a go at Fuzzy Logic. Receptacle For The Respectable transmogrifies from jangly harmony pop into headbangable death metal. Juxtaposed With U even sounded a bit like The Lighthouse Family. It was also, perhaps coincidentally, the first time that the band had started sounding like everybody had been describing them, as if Muse had somehow just done an actual rip-off of OK Computer. When Steve Lamacq played new tracks on air, he said “when I first saw the Super Furries live with Alan McGee, he turned to me and said, ‘Steve they sound like The Beach Boys’. Super Furry Animals have never sounded like The Beach Boys to me. And yet suddenly...”

With a simultaneous release on DVD in 5.1 surround sound with accompanying films for each song (including a Cuban cigar crisis and a list of things the Bible believes is punishable by death), Rings Around The World evidently sought to be a new 21st century listening experience of sorts. Yet it should be better remembered as the album that could first hold any sort of watertight claim as being the band’s flawed masterpiece. Plus, it’s just really good. Really, really good.


Presidential Suite (from the DVD)


(Drawing) Rings Around The World

Email ThisBlogThis!Share to TwitterShare to FacebookShare to Pinterest
Labels: discourse 2000

It's not much of a comment, but I would like to say I completely agree with this review, and am frequently bemused by people who seem to regard this as an inferior SFA album. It's a wonderful piece of work, and the tour of the same period was also utterly fantastic.

I just about prefer Phantom Power (more moving, I like the slighter higher pastoral quotient and it has "Slow Life") but Rings Around the World was the one to get me into them and is indeed fantastic too.

Funny thing is, I was going to post a comment explaining that this was the point where I stopped buying their records, because I'd been somewhat disappointed by Guerrilla and very much underwhelmed by everything I heard from this one.

And then on my way home from work today, I picked up a copy in the PDSA shop for a quid.