Albums Of The Year: Number 4 The true glory of Sufjan Stevens' much remarked upon shot at documenting all fifty states through song is not that he seems serious about it - if he wasn't, he's dug himself into something of a hole - but that this first attempt to document lives and histories outside his own home state shows how he's going to achieve the frankly unlikely feat, namely by thinking as big as his idea is. Big titles in the tracklisting, for one, and we can only dream of the day when Sharon Osbourne announces that "I think he's really showing what he's capable of, and I think he'll own that stage when he realises The Black Hawk War, Or, How To Demolish An Entire Civilization And Still Feel Good About Yourself In The Morning, Or, We Apologize For The Inconvenience But You're Gonna Have To Leave Now, Or, 'I Have Fought The Big Knives And Will Continue To Fight Them Till They Are Off Our Lands!' is made for his voice". (Alright, that one's a gallant instrumental, but you get the point.)

It's not as if Sufjan's previous two albums had demonstrated a flair for minimalism, but on Illinois the near-orchestral sweeps and sheer joi de vivre as expressed through the medium of the showtune seem to be able to fill every available space when required and pare back into the background. Lyrically, all human life is here, the themes expanding on often small-scale accounts, whether tracing the backstory of John Wayne Gacy Jnr before claiming "in my best behavior I am really just like him" or on Casimir Pulaski Day's heartbreaking story of the narrator's love dying of bone cancer on a state holiday. Perhaps as a born and bred Michigan man maybe the overall approach, mixing the personal with the more obvious local landscapes and signifiers, could easily have slipped into the banal and almost patronising, but the album's great strength is that the listener doesn't notice the possibility as so much potential guidebook aided frippery is turned effortlessly into deeply personal songs and an awareness of the space in which we live, which you'd be tempted to strip back and label spirituals, which in turn might be why Stevens has emphasised the arrangements and often unusual instrumentation, most of which he plays himself - this is a party he's throwing to celebrate a state in which he doesn't even live, it's just he wants to say a few words from the heart in the middle of it. That he went on to tour these songs with a band called the Illinoisemakers who performed cheerleader chants to introduce every song and ended gigs like this... 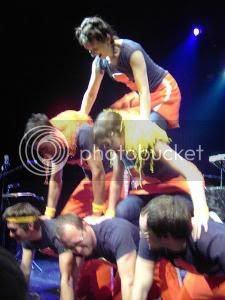 LISTEN IN: Decatur
EXTRA FEATURE: There is actually such a thing as Casimir Pulaski Day. More directly, you'd have to be well read to come up with such stories and Stevens pretty much qualifies through his writing for the New School Literary Journal in 2000.
Posted by Simon at 9:58 am

Email ThisBlogThis!Share to TwitterShare to FacebookShare to Pinterest
Labels: albums of 2005

Hey, you have a great blog here! I'm definitely going to bookmark you!
I have a anime music lyrics site.
Come and check it out if you get time :-)
Greetings.

Hey, you have a great blog here! I'm definitely going to bookmark you!
I have a anime music lyrics site.
Come and check it out if you get time :-)
Greetings.